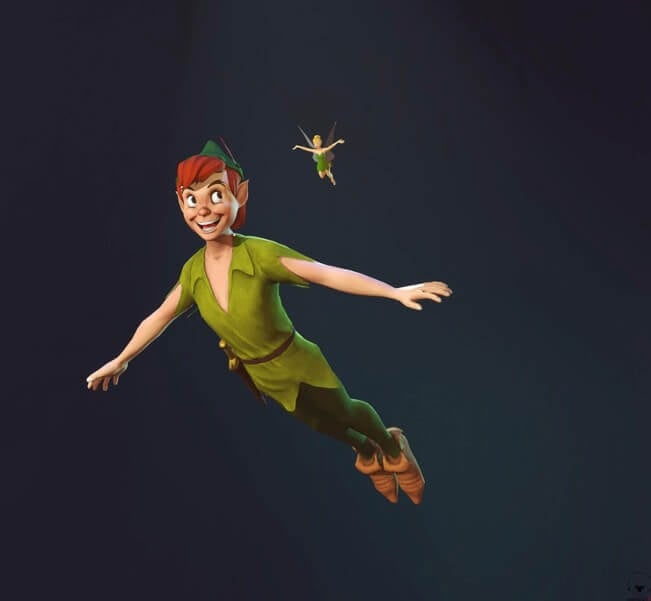 Peter Pan and his timeless story are one of the world’s most enduring tales of youth and adventure. He is a timeless Walt Disney animated classic. Here is a selection of 60 the most beautiful Peter Pan Quotes you will all love and hopefully share with the ones you love in your family.

“Little boys should never be sent to bed. They always wake up a day older.”

“Growing up is such a barbarous business, full of inconvenience… and pimples.”

“It may have been quixotic, but it was magnificent.”

“As you look at Wendy you may see her hair becoming white, and her figure little again, for all this happened long ago. Jane is now a common grown-up, with a daughter called Margaret; and every spring-cleaning time, except when he forgets, Peter comes for Margaret and takes her to Neverland, where she tells him stories about himself, to which he listens eagerly. When Margaret grows up she will have a daughter, who is to be Peter’s mother in turn; and so it will go on, so long as children are gay and innocent and heartless.”

“The moment you doubt whether you can fly, you cease forever to be able to do it.”

“Stars are beautiful, but they may not take an active part in anything, they must just look on forever. It is a punishment put on them for something they did so long ago that no star now knows what it was. So the older ones have become glassy-eyed and seldom speak (winking is the star language), but the little ones still wonder.”

“After you have been unfair to him he will love you again, but he will never afterward be quite the same boy. No one ever gets over the first unfairness; no one except Peter.”

“Once you’re grown up you can’t come back.”

“When the first baby laughed for the first time, its laugh broke into a thousand pieces, and they all went skipping about, and that was the beginning of fairies.”

“Oh, the cleverness of me.”

“Wendy, Wendy, when you are sleeping in your silly bed you might be flying about with me saying funny things to the stars.”

“To die would be an awfully big adventure.”

To live would be an awfully big adventure.”

“Girls are much too clever to fall out of their prams.”

“You see, Wendy, when the first baby laughed for the first time, its laugh broke into a thousand pieces, and they all went skipping about, and that was the beginning of fairies.”

“Children have the strangest adventures without being troubled by them. For instance, they may remember to mention, a week after the event happened, that when they were in the wood they had met their dead father and had a game with him.”

“You mean more to me than anyone in this whole world.”

“You need not be sorry for her. She was one of the kinds that like to grow up. In the end, she grew up of her own free will a day quicker than the other girls.”

“You always know after you are two. Two is the beginning of the end.”

“Second star to the right and straight on ’til morning.”

“I’ll teach you how to jump on the wind’s back, and then away we go.”

“Don’t you understand? You mean more to me than anything in this whole world!”

“Sometimes, though not often, he had dreams, and they were more painful than the dreams of other boys. For hours he could not be separated from these dreams, though he wailed piteously in them. They had to do, I think, with the riddle of his existence.”

“All of this has happened before, and it will all happen again.”

“There are many different kinds of bravery. There’s the bravery of thinking of others before one’s self.”

Wendy: “Where do you live?”
Peter Pan: “Second to the right, and then straight on till morning.”

“Wait for me somewhere between reality and all we’ve ever dreamed.”

“Adventures! In which good triumphs over evil!”

“I don’t want to go to school and learn solemn things.”

“Dreams do come true, if only we wish hard enough. You can have anything in life if you will sacrifice everything else for it.”

“Never is an awfully long time.”

“To live will be an awfully big adventure.”

“One girl is worth more than twenty boys.”

“Who be you to order me about and call me girlie?”

“So come with me where dreams are born and time is never planned.”
“Just think of happy things and your heart will fly on wings forever in never-never land.”

“It is not in doing what you like, but in liking what you do that is the secret of happiness.”

“Peter invented, with Wendy’s help, a new game that fascinated him enormously, until he suddenly had no more interest in it, which, as you have been told, was what always happened with his games. It consisted of pretending not to have adventures…”

“Come with me where dreams are born and time is never planned.”

“All you need is faith, trust and a little bit of pixie dust.”

“I never expected that you could have a broken heart and love with it too, so much that it does not seem broken at all.”

“Keep adventuring and stay not a grown-up.”

“Forget them, Wendy. Forget them all. Come with me where you’ll never, never have to worry about grown-up things again.”

“Wendy, one girl is more use than twenty boys.”

“All children, except one, grow up.”

“I taught you to fight and to fly. What more could there be?”

“I’ll think of a mermaid lagoon underneath a magic moon.”

“I have the strangest feeling that I’ve seen that ship before a long time ago when I was very young.”

“Never say goodbye because goodbye means going away, and going away means forgetting.”

“The second star to the right Shines in the night for you, to tell you that the dreams you plan really can come true.”

“Fairies don’t live long, but they are so little that a short time seems a good while to them.”

“Think of all the joy you’ll find when you leave the world behind and bid your cares goodbye.”

“When there’s a smile in your heart, there’s no better time to start.”

“The second star to the right, shines in the night for you, to tell you that the dreams you have really can come true.”

“He looked at her uncomfortably; blinking, you know, like one not sure whether he was awake or asleep.”

Peter Pan, released in 1953, is an American animated fantasy-adventure film produced by Walt Disney. The story of this movie was based on a 1904 play named ‘Peter Pan’ or the ‘Boy Who Wouldn’t Grow Up’, by Scottish novelist J. M. Barrie. Later in 1911, he gave rise to another version of the same in the form of a novel named ‘Peter and Wendy’.

The story revolves around the adventures of a mischievous boy named Peter Pan, who can fly and who never grows up. It is the truly magical experience of his journey with Tinker Bell (pixie friend) and a group of ordinary children to a small island called Neverland. This group of children whom he teaches to fly with the help of Tinker Bell, and Peter Pan himself, then fly away to this island and have many adventures. Their encounters with mermaids, pirates, the lost boys, Native Americans, and ticking crocodiles are interesting. This tale is believed to have enchanted children all over the world for more than a century.