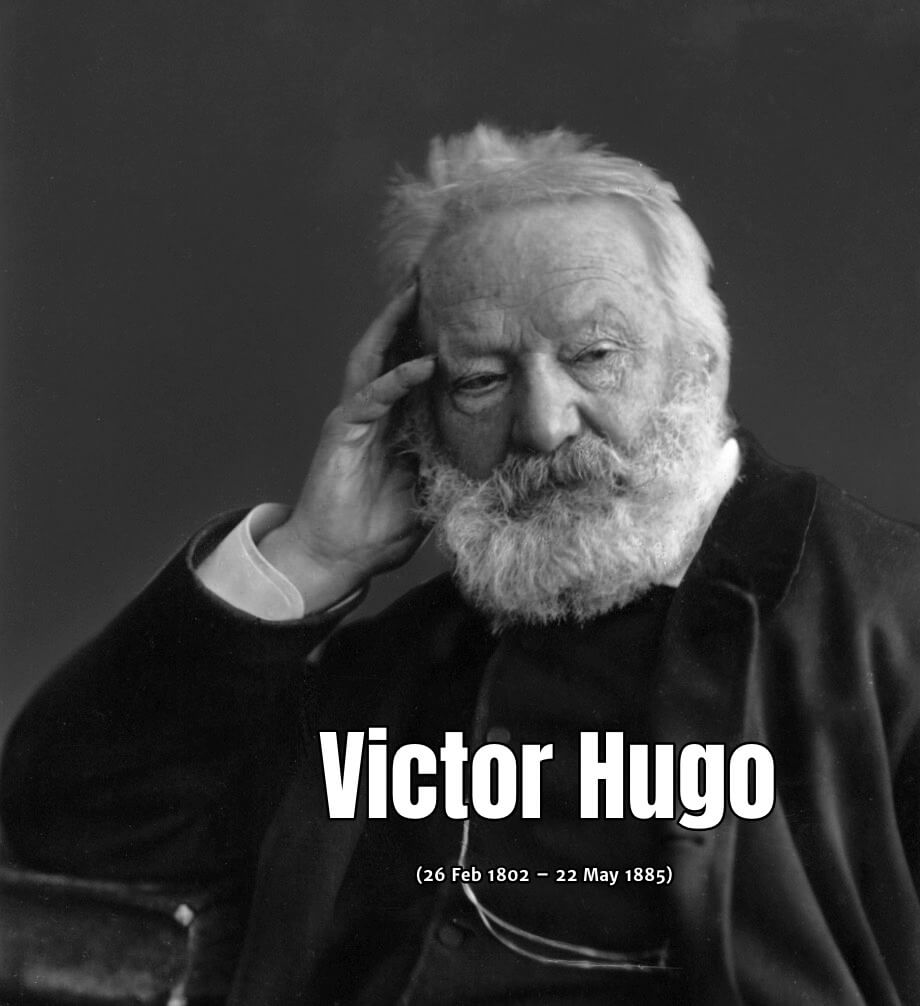 Born on February 26, 1802, Victor Marie Hugo was a French poet, novelist, and dramatist of the Romantic movement. best known for his novels Notre-Dame de Paris and Les Misérables. Hugo’s writings showcase emotion, love, beauty, and deep humanitarian beliefs. His later works were darker, with a focus on themes like God, Satan, and death. Hugo is considered to be one of the greatest and best-known French writers. Hugo’s death from pneumonia on 22 May 1885, at the age of 83, generated intense national mourning. He was not only revered as a towering figure in literature, but he was also a statesman who shaped the Third Republic and democracy in France. All his life he remained a defender of liberty, equality and fraternity as well as an adamant champion of French culture.

In his life Victor Hugo was famous not only for his work but also for quotations and sayings, He was the most quoted of French litterateurs. Here are the Victor Hugo Quotes for any occasion and topic:

80 of Victor Hugo’s Most Famous Quotes

“He who opens a school door, closes a prison.”

“Fame must have enemies, as light must have gnats.”

“A creditor is worse than a slave-owner; for the master owns only your person, but a creditor owns your dignity, and can command it.”

“Initiative is doing the right thing without being told.”

“Teach the ignorant as much as you can; society is culpable in not providing a free education for all and it must answer for the night which it produces. If the soul is left in darkness, sins will be committed.”

“You who suffer because you love, love still more! To die of love, is to live by it. ”

“Life is the flower for which love is the honey.”

“As the purse is emptied, the heart is filled.”

“Be like the bird that, passing on her flight awhile on boughs too slight, feels them give way beneath her, and yet sings, knowing that she hath wings.”

“Hope is the word which God has written on the brow of every man.”

“The first symptom of love in a young man is timidity; in a girl boldness.”

“A mother’s arms are made of tenderness and children sleep soundly in them.”

“An intelligent hell would be better than a stupid paradise.”

“I’d rather be hissed at for a good verse, than applauded for a bad one.”

“We say that slavery has vanished from European civilization, but this is not true. Slavery still exists, but now it applies only to women and its name is prostitution.”

“People do not lack strength; they lack will.”

“It is nothing to die. It is frightful not to live.”

“For prying into any human affairs, non are equal to those whom it does not concern.”

“Greater than the tread of mighty armies is an idea whose time has come.”

“He who every morning plans the transaction of the day and follows out that plan, carries a thread that will guide him through the maze of the most busy life. But where no plan is laid, where the disposal of time is surrendered merely to the chance of incidence, chaos will soon reign.”

“Strong and bitter words indicate a weak cause.”

“The future has several names. For the weak, it is impossible; for the fainthearted, it is unknown; but for the valiant, it is ideal.”

“Life is a voyage”

“Common sense is in spite of, not as the result of education.”

“Nothing is stronger than an idea whose time has come.”

“There is something more terrible than a hell of suffering–a hell of boredom.”

“My tastes are aristocratic, my actions democratic.”

“Inspiration and genius–one and the same.”

“Not being heard is no reason for silence.”

“To learn to read is to light a fire; every syllable that is spelled out is a spark.”

“Where no plan is laid, where the disposal of time is surrendered merely to the chance of incidence, chaos will soon reign.”

“Genius is a promontory jutting out into the infinite.”

“A library implies an act of faith.”

“God created the flirt as soon as he made the fool.”

“There are thoughts which are prayers. There are moments when, whatever the posture of the body, the soul is on its knees.”

“Emergencies have always been necessary to progress. It was darkness which produced the lamp. It was fog that produced the compass. It was hunger that drove us to exploration. And it took a depression to teach us the real value of a job.”

“To love another person is to see the face of God.”

“The greatest happiness of life is the conviction that we are loved, loved for ourselves, or rather loved in spite of ourselves.”

“The great acts of love are done by those who are habitually performing small acts of kindness.”

“Have courage for the great sorrows of life and patience for the small ones; and when you have laboriously accomplished your daily task, go to sleep in peace. God is awake.”

“What a grand thing to be loved!”

“When a man understands the art of seeing, he can trace the spirit of an age and the features of a king even in the knocker on a door.”

“There is nothing like a dream to create the future.”

“To give thanks in solitude is enough. Thanksgiving has wings and goes where it must go. Your prayer knows much more about it than you do.”

“It is by suffering that human beings become angels.”

“Nations, like stars, are entitled to eclipse. All is well, provided the light returns and the eclipse does not become endless night. Dawn and resurrection are synonymous. The reappearance of the light is the same as the survival of the soul.”

“The power of a glance has been so much abused in love stories that it has come to be disbelieved. Few people daresay nowadays that two beings have fallen in love because they have looked at each other. Yet that is the way love begins, and only that way.”

“Do not ask the name of the person who seeks a bed for the night. He who is reluctant to give his name is the one who most needs shelter.”

“Laughter is the sun that drives winter from the human face.”

“Our acts make or mar us, we are the children of our own deeds.”

“Short as life is, we make it still shorter by the careless waste of time.”

“Our mind is enriched by what we receive, our heart by what we give.”

“There is no more sovereign eloquence than the truth in indignation”

“A day will come when there will be no battlefields, but markets opening to commerce and minds opening to ideas.”

“Be as a bird perched on a frail branch that she feels bending beneath her, still she sings away all the same, knowing she has wings.”

“When grace is joined with wrinkles, it is adorable. There is an unspeakable dawn in happy old age.”

“Few people dare now to say that two beings have fallen in love because they have looked at each other. Yet it is in this way that love begins, and in this way only.”

“Toleration is the best religion.”

“Nothing is more powerful than an idea whose time has come.”

“Those who live are those who fight.”

“To divinise is human. To humanise is divine.”

“There is always more misery among the lower classes than there is humanity in the higher.”

“Christianity leads poetry to the truth. Like it, the modern muse will see things in a higher and broader light. It will realize that everything in creation is not humanly beautiful, that the ugly exists beside the beautiful, the unshapely beside the graceful, the grotesque on the reverse of the sublime, evil with good, darkness with light.”

“Change your opinions, keep to your principles; change your leaves, keep intact your roots.”

“What Is Love? I have met in the streets a very poor young man who was in love. His hat was old, his coat worn, the water passed through his shoes and the stars through his soul”

“Love is a portion of the soul itself, and it is of the same nature as the celestial breathing of the atmosphere of paradise.”

“Liberation is not deliverance.”

“He does not weep who does not see.”

“Even the darkest night will end and the sun will rise.”

“Where the telescope ends the microscope begins, and who can say which has the wider vision?”

“A man is not idle because he is absorbed in thought. There is a visible labor and there is an invisible labor.”

“It is from book that wise people derives consolation in the troubles of life.”

“There is one thing stronger than all the armies in the world, and that is an idea whose time has come.”

“The guilty one is not he who commits the sin, but the one who causes the darkness.”